PLAN YOUR TRIP AT MASSIF

Rising high above the mighty St. Lawrence River in the heart of Quebec’s Charlevoix is Le Massif, a sleeping giant of a mountain that’s home to some of the most spectacular skiing in Eastern Canada. Le Massif is about one hour east of Quebec City and its international airport, not far from Mont-Sainte-Anne, and in the centre of the province’s picturesque Charlevoix region. It is known for its commanding views of the St. Lawrence, steep runs, state-of-the-art facilities, and tantalizing cuisine that’s some of the best you’ll find at any ski area’s base in Canada. It’s also the mountain with the greatest vertical drop (770 metres; 2,526 feet) and the largest annual snowfall (650 cm; 21 feet) east of the Canadian Rockies.

To receive a free travel quote and resort information from a Banchi representative, simply fill out this form completely and a quote will be sent to you via your preferred method of contact.
Or call us Toll Free at 1-800-769-9660. 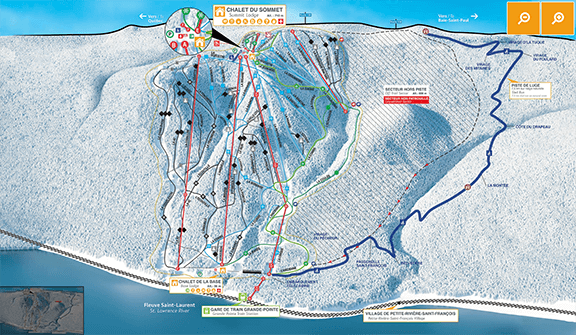